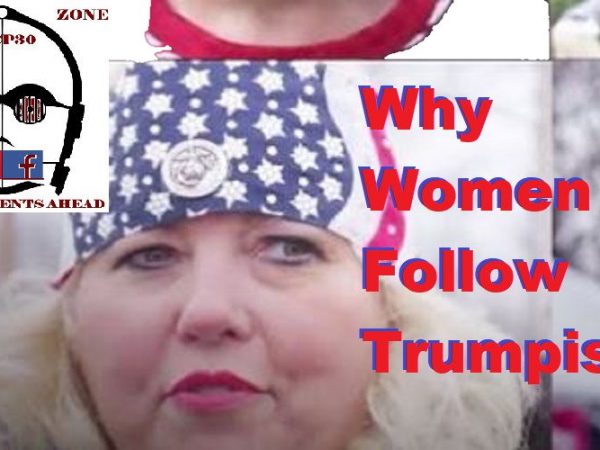 Here’s  a post to shed a little light on Trumpism. Here are some factors in why women can get ensnared and follow Donald Trump and his minions. 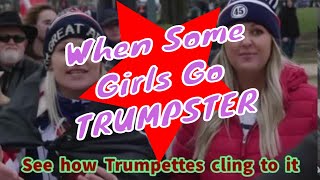 A minority of women in the USA did not see Donald Trump and the Repubican’t Party as repulsive. Why do some of these women really follow Trumpism to an extreme? Let’s explore some of the usual cult patterns.

Not all women who follow Trump get caught up in the cult of Trumpism. They either don’t pay much attention to politics, or never bought in to Trump as anything more than the Republican in the election she votes for on reflex. They are political bystanders who are fairly easy to reason with. Show a housewife how going from nuclear to renewable power reduces the electric bill. She will definitely get that. Like the dawn of the dishwashing machine, liberal progress has real benefits. Trumpism obstructs all of that.

They aren’t all Trump Tramps like the unemployed strippers paid to fill seats behind the podium for crowd shots.

Girlfriend going along to impress her boyfriend –Not quite a hostage but enthusiastic in supporting and repeating anything told her by her man. Doesn’t mind the loss of self if it keeps her fed and sleeping on a bed. Makes a good human shield.

Church lady -A transactional supporter. Usually practicing a corrupted form of religion like the prosperity gospel types. Has to put out a lot of effort to convince people that Trump is honest, moral and godly. The twisted logic needed to rationalize Trump is tied to her own vanity.

Daddy’s girl -Daddy’s always right. She’s loyal and studious to a fault. Her world view is like a 1950s sit com. When this collides with how  real people live today she becomes the perfect target. An easy mark. Every cult guru wants to become the substitute for daddy. Also, this is why many men follow too. Often an effort to over-write an inadequate or absent relationship with their birth father.

Anti-feminist backlash girl -Some girls did not react well to women’s liberation. Not such a problem when you can go to university for a Mrs Degree. However, now women have to work. Not just get to work. Feminism is scary when you see it has obligations and responsibility attached. So they burrow into a marriage, or resent that they can’t. Then they lash out with right wing mentality against other women. Much like a self loathing syndrome. Republican’ts hook them with tales of the breakdown of the family and culture war stories.

Hostage to a Trumpster -She doesn’t dare say anything. After living in a full immersion insane relationship with a Trumpster, she may even have Stockholm Syndrome.  If she hands you a note that says help, call the police.

Evil Woman -Well, evil seeks its own depth. This is a pre-exiting condition that may or may not be influenced by Donald Trump, but she will gravitate toward the domineering and cruelty of Trumpism.

Thanks are due to Jordan Klepper! His playlist inspired the video above.
You can see more below.