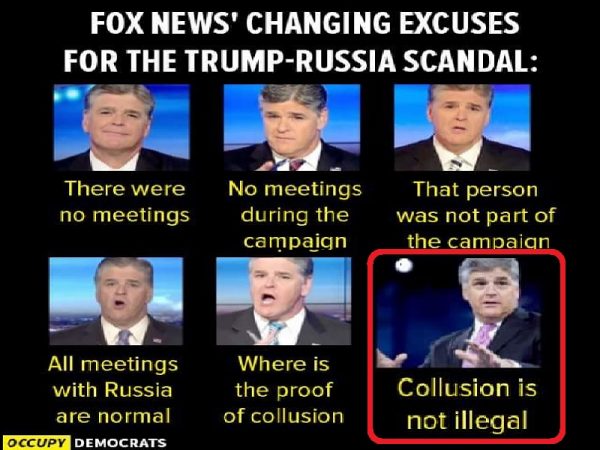 This post is uncovering the story of Trump Administration chaos and delusional policy. Of wishing away inconvenient truths by decrying a hoax. Uncovering The Trump Need To Hoax America.

Did you know this about Sean Hannity?
He was known around the White House as Trump’s shadow Chief of Staff. What a scary who’s who list that he brought in.

“Could be a thrill but it was also a serious burden. He counseled president Trump at all hours of the day. One of Hannity’s confidants said the president treated him like his wife Melania. Like a wife in a sexless marriage. Hannity chose this life so no one felt sorry for him but the stress took its toll. Hannity would tell you off the record that Trump is a bat shit crazy person. One of his associates said another colleague concurred. Hannity has said to me more than once quote, he’s crazy.”
Further into the book:
“Charlottesville turned the whispers about Trump’s fitness for office into full-blown shouts on other tv channels. At Fox, people were still just whispering, and only off the air. I really do think he’s lost it, one Fox executive remarked to me on august 19 2017. This person wasn’t speaking colloquially. They genuinely questioned the president’s sanity.”
They weren’t alone. At fox the following month, after a drink or two, a prominent Fox anchor admitted their concerns about the president’s mental health and well-being.
“He is not well, they said to me in the same concerned tone that people use while talking about their grandfather. For some journalists including at Fox, the president’s mental health was a running line of speculation. Narcissistic personality disorder was the most comforting explanation. Because the other possibilities were far more frightening. Words like delusional and dementia were invoked in private.”
Excerpted from the new book by CNN Chief Media Correspondent Brian Stelter called Hoax: Donald Trump Fox News And The Dangerous Distortion Of Truth.
Released August 25th

Brian Stelter is also the anchor of Reliable Sources on CNN.
Here he is on Rachael Maddow’s MSNBC show. He discusses the secrets about Trump’s primary strategy of denial, claiming the inconvenient truth is a hoax. I think this is what was said in the interview.

Mr. Stelter thank you for being here. I don’t like the cable news wars. It’s not my thing -I don’t play those reindeer games but I feel like this is important. As news. I feel like you have written a kind of rosetta stone here explaining particularly to people who don’t watch Fox News. A bunch of what has gone on with this presidency that otherwise doesn’t make sense, is that a fair way to look at it and is that what, in part, you’re trying to do here?

That’s why I did it. So many sources inside Fox News were pouring their hearts out to me and this was just in my normal course of work covering media. They said the channel that they used to love and respect had gone off the rails because president Trump slowly but surely took control of the channel. Roger Ailes was fired. He died and no one took over. There’s a lack of leadership, and that lack of leadership was most devastating when the pandemic hit American shores. It’s as if the president was lulled into a false sense of complacency by Fox. He pretended like the threat was over and so did the network and, like I said in the book, we’ll never know exactly how many lives were lost as a result. It is terrifying to think that the president is so misled by this single network.

You detail a number of policy pronouncements by the president. Actions by the president, wild accusations and provocations from the president, that appear to have come directly from in many cases chirons. The on-screen texts put up by specific Fox programs. You describe them as sort of a shadow cable news government that appears to select policies for him knowingly.
They may have been shocked at the beginning how much influence they had, but they know they have it now. They’re using it knowingly, while privately maintaining many of your sources to you, that they believe the president is unwell, is mentally not there, and not capable of holding down the job? That doesn’t just feel dangerous, it feels like an incredibly salient political decision.

It’s nothing close to journalism. There are real journalists at Fox who are very uncomfortable with this. Who are disturbed by the situation, but they don’t have the power. The prime time stars have the power. The Fox and Friends people in the morning have the power. They are the ones talking to Trump, and they are the ones then turning around telling their friends that in Hannity’s words, Trump is a run-on sentence.
In the words of an executive thought, he is not well.
It’s such a disconnect between the on-air rhetoric and the off-air reality. That is what’s propping up this presidency. It is hard to imagine the president at 40% approval were it not for these people on Fox. I don’t like to talk this way, but they’re lying about him every day. They are talking about a president that doesn’t actually exist. Someone who stopped the virus when it was coming in from China. We all know that’s not true, but these talking points are repeated over and over again in a form of propaganda we’ve never had in this country before.

We’re covering the 2020 conventions now. I remember on the first night of convention coverage this week, I talked about how the democrats in 2016 had so much drama at the beginning of their convention. With the Russians dumping all of the stolen emails and the chair of the party resigning right at the outset of the convention.
One of the things you write about in Hoax is how at the 2016 convention on the Republican side Roger Ailes was fired from Fox and your book in large part as a media book is about how they lost that rudder. Whatever you thought of Roger Ailes, from a million different angles it’s something that has never been replaced at the network.
What do you see as the future there. I don’t feel like you’re giving us a clear sense of where Trump and Fox go together from here on out.

Well the last five years have been unpredictable. No one thought that Trump was gonna be elected and no one at Fox expected it. So there was a situation where he gradually took control of the network. Because there was no other leader and now folks inside Fox including at the very top, the Murdochs. They’re concerned about what happens if he loses. Will he try to launch his own network?

I think you know the only way our information ecosystem can get more poisoned, Rachael.
It’s if trump has his own tv network and tries to compete with fox and tries to go even deeper down the rabbit hole down that kind of Q-anon world. That’s a fear inside Fox corporation that Trump is going to become a competitor.
I think there is a view at Fox though that being in the opposition is better. That being against Obama is easier than being for Trump. They’d rather be anti-democrat than pro-Trump and that’s why I think it’s important to understand Fox. Whether you want fox defeated, whether you want it successful, whether you wanted to have lots of competitors. You need to know how it actually operates. This is an anti-democrat channel, that’s what it’s really all about.
That’s why they weren’t showing the convention when you were last night at least in the 9pm hour.