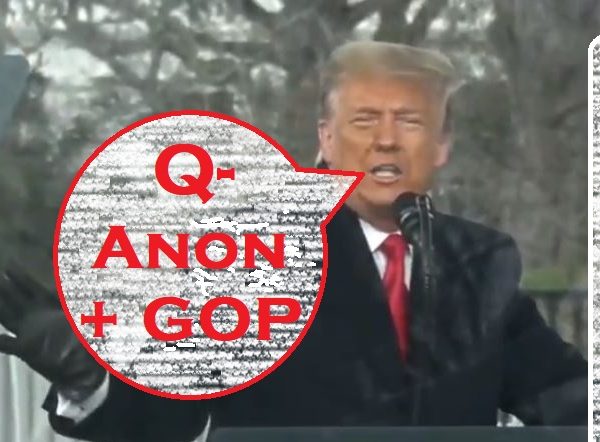 Q-Anon Warning Signs -What To Look For

Remember the drug use warning signs pamphlets? Well, this is the Trumpster version of that. The first time you hear these Q-Anon cult terms, pay attention. Look for these words on their devices. If you find any of these glossary of Trump Cult terms and letters, you’ll know they are early warning signs. Start a dialog so you can nip this in the bud. This isn’t a way to diagnose mental illness. These words can help you carry on a first stage conversation. A chance to measure their amount of buy-in to Trumpism.

Q-Anon and its followers rely partially on coded messages posted online. Analysis of what QAnon is typing out in conspiracy theory frames is all bullshit and gaslighting.  It jumps off in 2017 on 4chan and 8chan message boards, to Twitter and real life. Q, as the poster calls him- or herself, claims to have insight into the inner circles of the US government.

Learn to recognize the signs that your parent may be stuck in the cult of Trumpism.

Trumpsters have an esoteric language of words they misuse to signify to each other. It’s a hybrid of Republican talking points and QAnon txt writing. So if you hear these keywords, you may have a Trumpster on your hands. If so, don’t shun  further into isolation. Use what you learn here to signal back and get a early stage dialog. Think of it as feeding a maintenance drug. Just enough to reduce the influence of the dealers, and out of jail long enough to get into treatment.

Trumpsters want to be thought of as being connected to high levels of secret intelligence. So the writing style is haughty, yet paranoid. Because their lingo has a lot of brackets and code words and acronyms.

Q/Q Anon: Let’s start with the avatar of the poster(s) claiming to put mock classified intelligence online. The orignal name is Q Clearance Patriot, later shortened. After the insurgency fail, followers of QAnon are now called “CueAnon” and “17Anon.” The poster Q has yet to recognize the new handles, worthless efforts to evade social platform detection and enforcement. 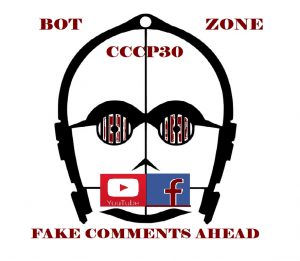 Drops: This is the name for the posts Q makes on 8Chan, which are then picked up and re-posted on Twitter, in Reddit subforums about storms and awakenings. They take the form of cryptic statements of paranoia, rhetorical questions, or replies to 8Chan posts. Also, it’s an entry point for Russian docs and doctored media. Dropped like targeted mind bombs.

187: That’s Police Code for Murder. Qanoids and Trumpers are obsessed with police.

Storm: As old as Nazi Stormtroopers, now this relates to what Trump said about “the calm before the storm” as a code to be ready to deploy.

Stand Back and Stand By: When Trump failed to respond appropriately as a leader or a human being, he spilled out these words.  They invoke them to affirm that they are indeed Trump’s to command or acting on Trump’s authority.

The Great Awakening: Initially, the theories created by Q followers pointed to Special Counsel Robert Mueller working in tandem with Trump to take down the cabal Trump was fighting. The destruction of the Democratic cabal became known as the “Great Awakening.” The p big climax which is supposed to explain where the masses of people to attack America would come from . This repeat fail, false prophesy is now considered a noobie-level conspiracy theory.

Q Clearance: Q’s claim to possesses the secrets of the dark cabaal, governments, or public figures put into a drop. In reality, “Q access authorization” is a term used only by the Department of Energy, and is analogous to Top Secret clearance in the Department of Defense.

Proofs: When used by Q, not the print shop, this refers to copied evidence that Q is involved in something real for that Q drops have revealed information on current events. All this is meant to do is hijack short-term, high volume  news keywords that gets attached to Q in order to get eyeballs with clickbait.

Comms: That’s short for “communications.” Q will often say “no outside comms” to claim that anyone posting as Q outside 8chan is fake. Because it is not in the Q echo chamber system. 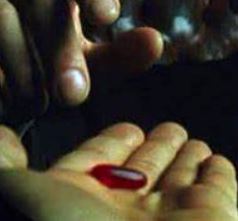 The Red Pill: The act of exposing “normies” (ie, non-believers) to Q drops. A cheezy reference to the movie “The Matrix.” A term used by a variety of fascist groups. Part of their recruitment pitch. It is for gaslighting non-believers into followers. Also used as a tonic against cognitive disonence.

Pedo-gate, CP: Q’s favorite claim is that there are massive numbers of pedophiles in politics, entertainment, and business. Anyone not a star in the Republican Party or Fox News must be part of a Satanic cult that eats children and openly flaunts its misdeeds through symbols and coded language. There’s many references in Q-Anon where online twittwerazzi are trying to libel public figures as pedophilia ringleaders. A one size fits all for manufacturing fake outrage to keep the cult in a mind control through their emotions.

News Unlocks /Map: This Q catchphrase comes with an info-graphic chart of the web of corruption and pedophilia that has overtaken the government. Q followers have collaged this theory into a map of conspiracy theories. This could be useful to study when trying to advance your Trumpster into phase two conversation. That’s when you can elicit admissions of silliness without engaging in debunking. 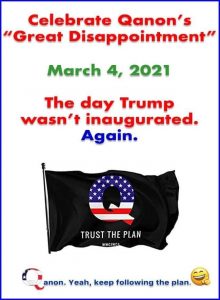 Future Proves Past, PPF:  that future events will prove past Q drops and previously theorized conspiracies. This can be used to break weak links in the Q chain of deceit.

Sealed indictments: QAnon followers believe there is a cache of sealed indictments in the federal courts. An unverifiable proof {stock in trade lies common to Q and Republicans] that there is going to be mass arrests of Democratic Party members in their Great Awakening,

WWG1WGA: An abbreviation for “Where We Go 1 We Go All,”  they use it every April 2 and attributed the quote to John F. Kennedy, but it appears to be a line of dialogue from the 1996 movie “White Squall.”

Fireworks/Pain/Boom: Terms used by Q to warn that bad things about to happen, or that have happened, to members of the satanic cabaal. It’s why they were triggered by Biden’s inaugural fireworks display. Breaking it down. “Fireworks” usually means a major media story currently breaking (which Q attempts to retroactively predict), while ”Pain” is about something bad happening to the cabaal, and “Booms” are major media stories that drop like bombs. A preemptive move to head off cognitive dissonance in the followers. Plus it’s a keyword hijack.

Anons: The Q-Anonymous followers who actively collect factoids, found or fashioned, for clue drops to their master.

Autists: Another term for the followers who obsess over the meaning and clues of Q drops. A takeoff on the term “weaponized autism,” used in reference to self-proclaimed online detectives who try to solve major crimes before police can. This is emotional kidnapping fed in a steady stream to keep followers vulnerable to suggestion, based oo concerns shared with Q.

5-5: A radio call sign for “loud and clear.” One of many military or technical terms Q will often throw out, trying to pretend they go on special operations missions. Fake justification is gained by saying it is being carried out under President Trump’s orders. So this is a combination of stolen valor and delusions of grandeur. 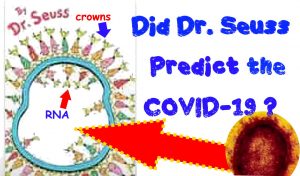 Clowns: A reference to the CIA, who are also referred to as “C_A” for the fear of being keyword discovered when plotting about the CIA.

Mockingbird: Refers to Operation Mockingbird, an old CIA operation to control and manipulate new and advertising media in their coverage of American foreign policy. Q used to reference Mockingbird quite often, but that stopped when the Trump era started.

No Name: Q’s code name for late Arizona Sen. John McCain denoting that he is a generic Republican, thus a RINO (Republican In Name Only.)

LARP: Abbreviation for “Live Action Roleplaying Game.” A number of writers have speculated that Q Anon is simply an internet roleplaying game, which Q often mocks by posting links to articles about the conspiracy theory, and rhetorically asking “all for a LARP?” Steve Bannon had an online social gaming company (games like farmvile) that raised a lot of money for the far right while setting up a covert communications link. It’s the same way ISIS used to relay messages and plots.

Don't forget, #QAnon is fake and a #Larp and actually is #DeepState pushing a #neocon agenda, just ignore the fact that he has been at the last three #Trump rallies & that #POTUS has gone out of his way to acknowledge people in #Q gear. This is a #GreatAwakening. Time to wake up. pic.twitter.com/uZrMuPLJpy

These aren’t the only terms that Q and his/her followers commonly use, but they’re the ones people need to know if they want to have some kind understanding of this mental illness.

This education will help keep you and your loved ones from becoming Q-Anon’s next victim. Then you should approach your friend or relative, keeping in mind that love is stronger than hate and paranoia.

Russia and the Christian right are promoting QAnon theories, while the cult’s leaders are calling for followers on Twitter to prepare themselves for an armed civil war.

Q-Anon Warning Signs could be the only way to know if your friend or loved one might be falling for the Cut of Trump.