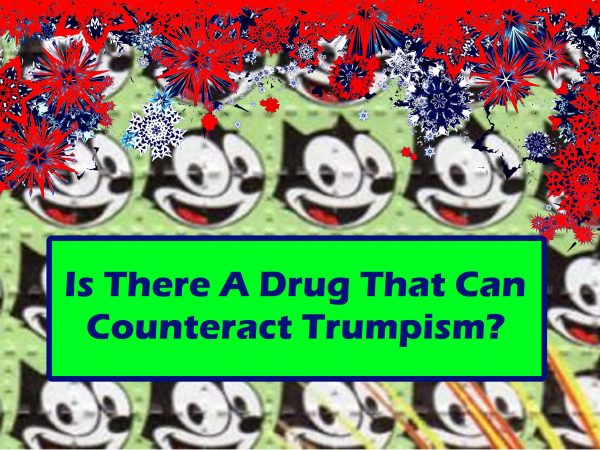 Is There A Medical Treatment For Trumpism?

While the Trumpism ailment is too new to allow for any pharmaco-therapy research. We do think there are options. There may be hope to mature a patient out of Trumpism with a hallucinogen like ibogaine, LSD-25. or ALD-52. Let’s look into the prospects for a medical treatment for Trumpism.

Ibogaine would be my first guess at a drug therapy. It is used by youths in Gabon and the surrounding area of Africa, as part of a coming of age ceremony. It has been tried on veterans suffering PTSD, but since the vast majority of ibogaine doses go toward treating drug addiction, there’s not much to look at with regards to ibogaine use in treating mental illness. Unfortunately, the focus of ibogaine studies are concerning its use as an addiction stopper. Ibogaine for treatment of mental illness or brain damage will have to wait in the USA until the FDA approval trials for ibogaine to treat drug addiction are on the back burner.

One other aspect of ibogaine and Trumpism is the prevalence of drug use in the right wing community. Methamphetamine, Adderall and psychiatric drugs are often abused. This explains the content of late night Q-anon site comments and posts. Ibogaine is the only successfully tested pharmaco-therapy for addictions to stimulants. So there may still be an addiction to deal with where maturing out of a Trump fixation as a bonus side effect.

Hallucinogens can break down and deconstruct the ego. ALD-52 and LSD-25 are also sometimes suggested as a powerful but clean and manageable drug to use in conjunction with talk therapy afterward. Selfishness and assumptions of entitlement are manifestations of the ego. An ego -whipping hallucinogenic experience, guided by a therapist, can nip Trumpism at one of it’s hugest points of origin.